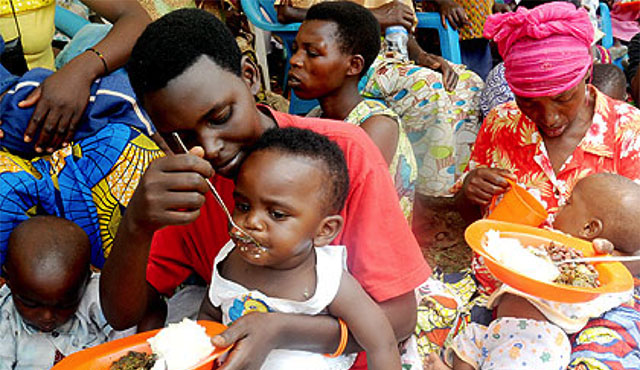 While still struggling with undernutrition caused by poverty and food scarcity, combined with deleterious consequences of infectious diseases, developing countries are also increasingly facing the emergence of overweight and obesity-associated issues. This kind of paradoxical situation characterizes what is known under the term of “double burden”. Indeed undernutrition and overweight, as the two faces of the same coin, are both forms of malnutrition caused by inadequacies in the food system.

Of particular concern is the increasing number of overweight children living in countries where undernutrition is still an issue. According to the World Health Organization (WHO), some 43 million children under five are overweight or obese, with more than 75 per cent of them living in developing countries. In fact, the number of overweight children in Africa has almost doubled in the past 20 years. At the same time around the globe, globally 100 millions children under five are underweight and mortality due to undernutrition is estimated at 35% of all death among children of this age range.

Other hotspots for obesity and weight-related problems include Brazil, where more than 50 percent of adults are overweight and obese, and Mexico, where people drink more carbonated beverages per head than any other country. Indeed, in such countries where running water isn’t guaranteed and bottled water is expensive, these soft drinks have become a daily dietary staple for everyone from infants to the elderly.

In many low- and middle-income countries, policies addressing obesity and diet-related diseases such as diabetes, heart disease and stroke – are much further behind those dealing with the other half of the double burden of malnutrition, especially in Africa and South-East Asia. And even when such policies exist at a national level, they are often not implemented at provincial or district level. Only one third of surveyed countries regulate the marketing of foods to children, and only a few have taken measures to reduce salt or trans fats in foods.

This has lead the WHO to issue last June a statement signed by Francesco Branca, Director of WHO’s Department of Nutrition for Health and Development, warning on the emerging double threat of childhood obesity and undernutrition in low- and middle-income countries. In particular, the statement points out that many among those countries are neglecting overweight and obesity as major health threats.

“While it is vital to maintain efforts to reduce undernutrition, the world needs to do much more to prevent and care for the growing numbers of people that are overweight or obese and living in low- and middle-income countries,” says Dr. Branca. He also urged policymakers to give more attention to improving the nutritional status of pregnant women and adolescent girls who will become the mothers of the next generation.

To assist countries close the policy gaps and improve their peoples’ nutritional status, the statement presents a package of 24 essential nutrition actions. These include improving nutrition of pregnant and breastfeeding women; encouraging early initiation of breastfeeding, exclusive breastfeeding for the first 6 months, then continued breastfeeding up to 2 years; and promoting appropriate solid foods for young children. The WHO thinks that if focusing on these essential nutrition actions, countries can reduce infant and child mortality, improve growth and development, and improve productivity. Countries such as Ethiopia, Brazil and Peru, as well as India’s second most populous state, Maharashtra, have already achieved successes as a result of implementing these actions.