Malnutrition as leading cause of children stunted growth 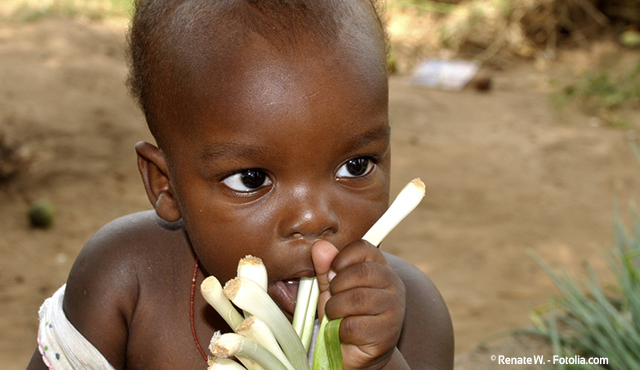 Malnutrition as leading cause of children stunted growth

Worldwide, malnutrition is estimated to affect over 2 billions people, that is to say one third of the world’s population (for a complete understanding of the subjet, consult our article)

Children are the most visible victims of malnutrition. In the developing countries, one of three children is malnourished, accounting for up to 50% of total children deaths.  More than 70% of malnourished children live in Asia, 26% in Africa and 4% in Latin America and the Caribbean. The 3 most common known deficiencies are iron, vitamin A and iodine.

Infantile malnutrition is not only a major risk of child death, but also has long-term disastrous effects on health, reaching far beyond metabolic disorders. It can cause learning disabilities, mental retardation, blindness and poor immunity (for reviews see (1, 2)). In many cases, the problem already appears before birth, with a malnourished mother. Early nutrition, and thus feeding practices after birth, is essential, knowing that the first year of life is a critical period for human growth and development.

Malnutrition weakens the immune system and thus increases the risk of infections and diseases (3, 4). For instance, it is a major risk factor in the outbreak of tuberculosis (5). Adequate intakes in micronutrients have been demonstrated (in either animal or human studies) to be required for the immune system to function efficiently.  The main micronutrients involved are essential amino acids, the essential fatty acid linoleic acid, folic acid, vitamins (in particular, A, D and E) and some trace element such as zinc, copper, iron and selenium (6-9).

Early nutrition is even more crucial because it can directly influence the development of the immune system. The interactions between micronutrients, microbial community and environmental antigens condition the maturation of the immune system after birth, thus influencing future reactions and defining patterns of defense against potential pathogens (10, 11). Undernourished children are more vulnerable to malaria, pneumonia, diarrhea and measles. They suffer up to 160 days of illness each year.

Malnutrition in children causes diseases such as kwashiorkor (acute form of protein-energy malnutrition), anemia (impaired blood system), that triggers concentration disabilities) or rickets (impaired growth of the bones), and blindness (caused by vitamin A deficiency). In particular, iron deficiency is recognized the most common cause of anemia. Impaired mental development due to iron deficiency in babies under 2 years old affects 40 to 60% of children in developing countries (12, 13). Iodine deficiency (mainly during pregnancy) is the world’s most significant cause of preventable brain damage and mental retardation in human populations. It presents a significant public-health problem in Nepal for example, with one third of its people at risk and almost one out of 5 of school-aged children found to be iodine deficient. The South Asia region contains nearly 40% of newborns born annually unprotected from brain damage due to iodine deficiency (Nestlé annual report 2011).

Nutritional deficiencies resulting from malnutrition are a leading cause of stunted growth. However, these deficiencies may not only result from food scarcity and poverty. Failure to absorb nutrients and energy from food, even in sufficient amount, will also eventually lead to impaired growth. There are a number of intestinal chronic disorders that may alter food absorption and thus require a special diet. For instance, growth failure is common in children with inflammatory conditions of the colon and intestine, such as Crohn’s disease (14). In addition, these children suffer from stool loss and are take medications interfering with growth hormones (steroids). Children with diabetes also show slowed growth rates (15, 16).

Very recently, food allergies have been entering the equation. A study presented at the 2013 annual meeting of the American Academy of Allergy, Asthma & Immunology (http://www.annualmeeting.aaaai.org/) suggests that food allergies in children may affect growth. This seems to be the case when multiple food allergies, and milk allergy in particular, are involved.

In many cases, when food consumption is corrected early enough, spontaneous catch-up growth occurs. Unfortunately, this catch-up is sometimes incomplete, leading to permanent growth deficits (17). Researchers are thus eager to know more about the molecular mechanisms of refeeding. In this regard, nutrigenomics is thus becoming a powerful tool by studying the global changes in genes expression observed under nutritional manipulation. Gene expression analyses have already revealed that food restriction affects specific gene targets both via transcription regulation and epigenetic control (17). The role of epigenetic regulation in growth has still not been elucidated so far and looks very promising for the development of new treatments for children with growth disorders.

Food industry also has a role to play in the picture. Usual dietary intakes of children in poor populations are far from matching the actual needs, both in energy as well as in regulating micronutrients. Innovative approaches for fortification of children’s foods using combination of micronutrients embedded in powders or lipid-based supplements hold great potential to prevent micronutrient deficiencies at reasonable cost, thus preventing the adverse consequences of malnutrition in children.