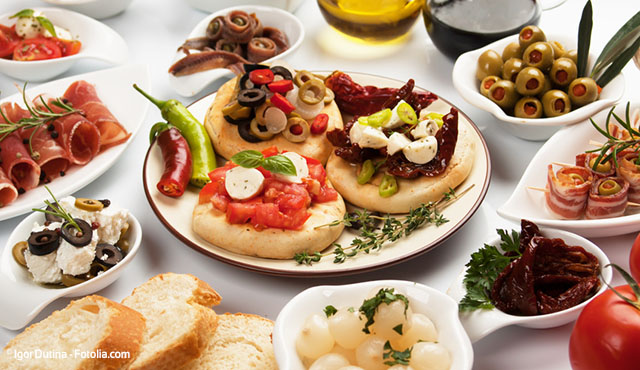 More than just a diet: a lifestyle where good taste meets good health

Mediterranean diet is not a diet in the meaning of ‘going on diet’. On the contrary, it’s a whole lifestyle involving delicious food, leisurely dining and regular physical activity, which has been practiced for thousands of years by residents along the Mediterranean coast.

In the nutrition field, the Mediterranean diet more specifically refers to a modern nutritional recommendation inspired by traditional dietary patterns mainly found in southern Italy, Greece, and Spain. Its most commonly understood version, presented in scientific literature from the mid-1990s on, is characterized by abundant consumption of plant foods, fresh fruit as the typical daily dessert, olive oil as the principal source of fat, moderate to high consumption of fish, moderate consumption of dairy products (mostly as cheese and yogurt), moderate wine consumption, and low consumption of meat (1, 2).

The health effects of a Mediterranean diet have been studied extensively in the last decade, resulting in mounting evidence for protection against heart disease, metabolic syndrome, some types of cancer, obesity, type 2 diabetes, dementia, Alzheimer’s disease, and also for lifespan extension (3-5).

The type of fat, not the amount, matters

From the point of view of mainstream nutrition, Mediterranean diet is considered a paradox. Indeed, even though people living in Mediterranean countries tend to consume relatively similar high amounts of fat as do people in countries like the United States, they show far lower rates of cardiovascular disease (6).

This has been nicely confirmed in a very recent 7-year study conducted on 7,500 people in Spain (7).The results, freshly published last month (Feb 2013), showed that people put on an unrestrictive plant-based diet supplemented with either olive oil or nuts cut their heart disease risk by 30% compared to control people following a standard low-fat diet. The results were so drastic and control people so disadvantaged that the study was stopped ahead of time.

Mediterranean diet is not just about eating healthy fat

Although these health benefits cannot exclusively be attributed to the diet alone, but rather result from the related way of life as a whole, foods included into the Mediterranean diet nevertheless provide great amounts of micronutrients, antioxidants, vitamins, minerals, and fibers that work together to protect against chronic diseases. In addition, most of them are fresh, seasonal and unprocessed whole foods, prepared with rather simple culinary methods.

The above-mentioned study underlines that it is the type, and not the amount of fat, that matters for cardiovascular risk. Similarly, the amount of calories does not seem to be decisive either since people following the Mediterranean diet consumed more calories. Moreover, this study illustrates the synergic effect that can be driven from nutrient combination. It’s the blend of Mediterranean diet components – not one particular ingredient – that promotes heart health, stated Dr. Miguel Angel Martinez-Gonzalez, who worked on the study at the Universidad de Navarra in Pamplona, in an interview for Reuters Health.

Indeed, the association between Mediterranean diet and cardiovascular protection does not only come from the healthy mono-unsaturated fats contained in extra virgin olive oils and nuts, but also from their interaction with beneficial phytochemicals, such as polyphenols.

Thus, shifting to healthy Mediterranean diet it is not about adding nuts to your ice cream or olive oil to your cheeseburger. It involves a more global change in the whole dietary pattern to trigger results.