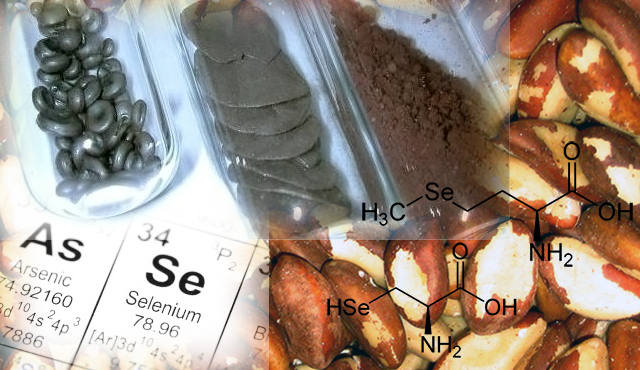 The role of selenium in human nutrition has recently raised interest in the nutrition field. As intakes in Europe have decreased to sub-optimal level in recent years, concern has been expressed that marginal selenium deficiencies may enhance the risk of developing chronic diseases such as cancer and heart diseases.

Selenium is incorporated into proteins to make about 25 selenoproteins in our body. Many of them act to protect the body against oxidative damage but can also plays a role in thyroid function, in particular in thyroid hormone production, in immunity and inflammation (for more details consult our article on the subject).

Although there are plausible mechanisms by which selenoproteins could reduce the likelihood of developing cancer (for example by protecting DNA damage through their strong antioxodative power, by inducing DNA repair in damaged cells, or even by inhibiting spreading and inducing death of cancer cells), controversial results of numerous studies show that there is still limited evidence that foods containing selenium protect against the risk of any form of cancer

The role of selenium supplementation in cancer protection has been extensively reviewed recently. Accumulated evidence from prospective studies, intervention trials and studies on animal models of cancer have suggested that selenium supplementation may protect against cancer development, at least for prostate, colorectal and lung cancer. For instance, final results of the Nutritional Prevention of Cancer Study, which involved 1,312 subjects for 6 years, showed 41% reduction of mortality due to cancer and 25% reduction of cancer incidence (1). More recently, the Third National Health and Nutrition Examination Survey, which was conducted on 13,887 adults, also reported that increased serum selenium levels were associated with decreased cancer mortality (2).

However, not all studies have shown a relationship between selenium status and cancer. Two long-term studies, the one conducted in France and the Selenium and Vitamin E Cancer Prevention Trial (SELECT) in the United States and Canada, could not attest any significant correlation between selenium intake and reduced risk of prostate cancer development in men. On the contrary, results even showed an opposite effect, with people under selenium and vitamin E supplementation having slightly higher incidence of prostate cancer (3-5). Findings from observational cross-sectional studies have also raised concern that high selenium exposure may be associated with type2 diabetes or insulin resistance, at least in well-nourished populations (6).

A meta-analysis of thirteen observational studies examining the role of selenium in heart disease found a moderate protective effect of selenium against the risk of heart disease (7). Nevertheless, studies in population with high selenium intake as well as dietary supplementation studies were unable to find sufficient evidence of cardiovascular protection (for a review on the current status of the research see (8)).

A 9-month follow-up study published in 2007 and conducted in 174 HIV-seropositive individuals showed that high dose daily supplementation (200ug/d) was able to decrease the progression of the disease, suggesting that selenium could become a simple and cost-effective adjuvant in HIV therapies (9).

Contracting results coming from different studies makes it hard for food authority organisms to deal with health claims linking selenium intake and cancer reduction. Although selenium is one of the few ingredients to have cancer reduction claims on the label in US, they must include the disclaimer, “The FDA (Food and Drug Administration) has determined that this evidence is limited and not conclusive.”

However, controversial results of trials on Selenium supplementation in general indicate that selenium optimal intake may vary according to life stage, gender, general state of health and genotype. This has also been supported by an increasing number of studies using nutrigenetic approaches, considering the effect of some genetic variants on individual daily requirements. However, most of these studies so far have investigated selenium as a single micronutrient and one or a few genetic variant at a time, thus not leading to greatly significant results.

The more global systemic approach of nutritional genomics now provides new methods to look for combined effects of many dietary factor and multiple genes. Further research in the field may complement public health approached in order to determine optimal levels of selenium, as well as other micronutrients. For further reading see (10).

New insights that will be brought by the nutrigenetic and nutrigenomic technologies might very well lead to a breakthrough of selenium in the next coming years, as one of the most potent anti-cancer micronutrient.

Moreover, results from 2 new clinical trials conducted with yeast selenium ingredient by Cypress systems, an ingredient development company based in California, are expected this year.