Dr. Passwater: "FDA’s confusion about selenium health claims gets in the way of letting the public know of selenium anti-cancer properties" 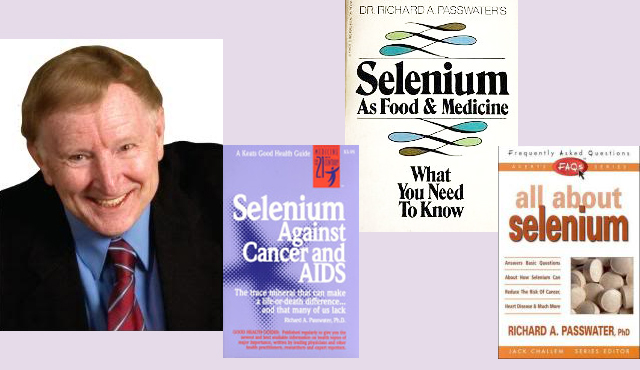 Dr. Passwater: "FDA’s confusion about selenium health claims gets in the way of letting the public know of selenium anti-cancer properties"

In a very engaged online article for Vitamin Connection, Dr. Passwater explains why the US Food and Drug Administration (FDA) has been confused about selenium’s role in cancer prevention. Major cause for this confusion is the confusing biochemistry of selenium itself: ‘ The biochemistry of selenium is different from other nutrients, which makes it difficult for many to understand.’

First, selenium is not a mineral, strictly spoken; it belongs to the non-metal elements. As such, selenium is not acting into the body in the same way as other minerals and metals such as calcium, magnesium, iron , zinc, etc. Indeed most dietary selenium is converted into human’s 21st amino-acid selenocystein.

Second, prevention of cancer by selenium compounds is multifaceted partly due to the fact that there is a large number of selenium-containing active compounds. Whereas most selenium researchers are examining the anti-cancer roles of selenoproteins, including through their antioxidative properties, Dr. Passwater has been focusing on smaller selenium-containing compounds called selenols and their derivatives, which he think are far more effective against cancer. He states:  ‘In the 1960s, my research indicated it was the selenols and their derivatives that were largely responsible for the marked increase in anticancer activity over other selenium compounds. These selenol-related compounds are generally more effective in preventing and destroying cancer cells.‘

Furthermore, only certain selenium-containing compounds significantly contribute to selenol formation, and thus cancer cell destruction. Among the good dietary sources found are methylselenocysteine (naturally found in some vegetables including garlic, brassicas, leeks, and onions), and some particularly interesting compounds named selenides, which seem to be even more effective.

As a result, Dr. Passwater quite provocatively says: ‘It is not so important that FDA doesn’t quite understand selenium biochemistry, but what is more important is that the FDA is restricting getting the information to the public that selenium may be protective against cancer.’

Indeed, the vast majority of selenium researchers accept as true the evidences indicating that dietary selenium reduces the incidence of several cancers. Cited in Passwater’s article are the works of researcher such as Dr. Markus Selenius (quite a predestinated last name!) and his colleagues at the Karolinska Institutet in Sweden, as well as Dr. Huawei Zheng  from  the Grand Forks Human Nutrition Research Center of the US Department of Agriculture.