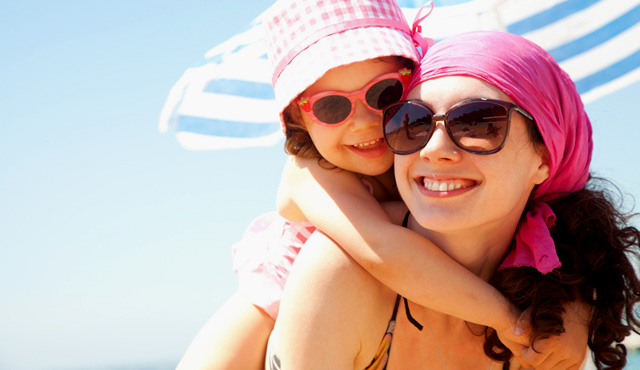 Dietary-induced UV-protection as an emerging concept

With summertime inviting us to sun-exposed open air activities or tempting us to lie out at sandy beaches, articles on prevention to sun exposure are flourishing in health-related magazines and webpages. They all remind us that avoiding the sun (especially between noon and 4 pm), wearing protecting clothes (hats, long-sleeved shirts or even treated fabrics), as wells as using sunscreens still remain the best ways of protection against sunburn. However, dietary-induced UV-protection has come out recently as a topic of interest in public health and preventive medicine. Compared to topical sunscreens, which act locally and require frequent applications, dietary methods may provide whole body protection. This concept has led to an explosion in the marketing of functional foods with claims on skin health improvement. Among them are products containing carotenoids and vitamins (mainly A, C and E), which are known for their anti-oxidative properties. Do they work? Can we trust them? Let’s have a look at the status of science in this field.

From lying on the beach to sunburn and skin cancer

Light exposure is known to induce cascades of biochemical reaction in the cells, eventually leading to the production of harmful compounds called reactive oxygen species (ROS), which trigger cellular and DNA damages. In the skin, excess UV radiation can ultimately lead to skin cancer. The incidence of skin cancer is increasing at alarming rates of 3 to 8% yearly, with over 1 million new cases of non-melanoma skin cancer (the most common form due to excess sun exposure) each year in the United States (1). With around 2,000 new cases of skin cancer diagnosed every year, Switzerland is the most affected country in Europe. At a minor level, excessive sun exposure leads to sunburn, which is a common inflammatory reaction designed by UV-induced erythema. UVB irradiation is considered the major cause of sunburn, whereas UVA irradiation, less aggressive but more penetrant, is associated with skin aging and sun allergies. Human skin has its proper way of protection against UV radiations by melanins, the pigments of the skin, which scatter and absorb UV light. Upon sun exposure, pigmentation is induced by the increasing production of melanin. That’s suntan. The darker the skin, the higher the protection against sunburns.

Which nutrients are we talking about?

Among the over 600 plant pigments belonging the carotenoids family, β-carotene (found in yellow and orange fruits such as mangos, papayas and vegetables such as carrot and sweet potato) is the first-rate candidate for endogenous photoprotection. In addition to its antioxidative action, it is also a precursor of Vit A and a stimulator of melanin production. Although intervention studies are still controversial upon its photoprotectiveness through dietary intake, a meta-analysis conducted in 2008 reported an overall protective effect of β-carotene supplementation against sunburn. (5). However, this effect depends on the duration and the dose of the treatment before sun exposure. Concerns about the safety of this compound when applied in the relatively high doses needed (cancer risk) raised a debate on suitable dose levels to be used. Alternatively, mixtures with other carotenoids such as lycopene (primarily found in tomatoes but also in red carrots and watermelon) and lutein (found in leafy green vegetables) have been investigated for the same benefits.

Whereas no protection could be achieved with supplementation with Vit E alone (a term comprising several compounds including tocopherols), short-time intervention with high doses of both Vit E and C was shown to provide some protection against sunburn.

Polyphenols, which are major constituents of a plant-based diet but are found in considerable amounts in tea, cocoa and red wine, seem to ameliorate skin damage following UV exposure in animal studies and thus are very promising. As an example, protective effects of consumption of a flavanol-rich cocoa beverage could be observed clinical trials (6).

As a result, a diet rich in phytonutrients, including those discussed above, may convey whole body protection against sunburn. However, currently reported data are still inconsistent. Thus, tanning pills and anti-sunburn diet supplement seem rather premature. Further investigation of optimal doses, protection mechanisms and safety issues is still needed. Furthermore, there is growing evidence that these compounds, in addition to their direct action as UV-blockers or ROS-scavengers, can modulate gene expression. Studying modifications of signaling cascades by nutrients is right at the core of nutrigenomics field of investigation. Advances in that specific domain will certainly deepen our knowledge of how these dietary compounds may promote photoprotection. Moreover, since beneficial effects are always dose-dependent and might be challenged with adverse effects, combinatorial micronutrition could help designing the most optimized mixture to prevent sunburn, containing optimum levels and proportions of antioxidatives micronutrients, working in synergy.

Of course nutrition-based sun protection is not meant to substitute topical sunscreen applications. It should rather be seen as complementary.