Higher good cholesterol levels: rather a sign than the cause of reduced heart disease risk? 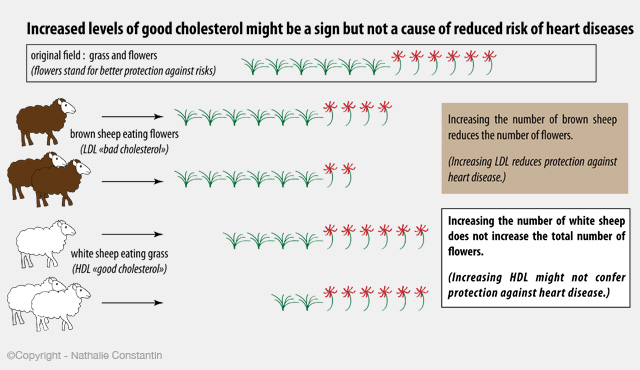 Higher good cholesterol levels: rather a sign than the cause of reduced heart disease risk?

Although cholesterol is an essential compound of our body, involved in all cells’ structure and precursor of steroid hormones, it can become harmful when present in too high levels in the blood.  Accumulation of cholesterol in the walls of arteries, mainly the heart arteries, promotes the formation of fat plaques, eventually leading to atherosclerosis and heart diseases such as stroke.

Brand new findings from a study (1) published last May, which makes use of powerful database of genetic information and relies on quick and low-cost genetic analysis, suggest that there is no causative relationship between higher good cholesterol levels and lower heart disease risk. The study showed that people with inherited genes that provide them with naturally higher HDL levels were not better protected against heart disease that those with genes giving them slightly lower HDL levels. For comparison, the researchers also examined genetic variations altering LDL levels. In that case, the results clearly showed effects on the risk.

These findings are quite disturbing taking into consideration all the companies developing and testing drugs aiming at rising HDL levels and the frequent recommendations to patients with low HDL levels to raise them by taking niacin. Thus, without questioning the already existing well-documented studies leading to an association between higher good cholesterol levels and lower heart disease risk, this new study challenges the causative nature of this link.

What if higher HDL was just a sign that something else is going on that reduces the risk? Let’s imagine two species of sheep corresponding to, respectively, good and bad cholesterol: white sheep eating merely grass and brown ones preferentially eating flowers. As expected, you will find more flowers on a field with white sheep than on a field occupied by brown sheep. It’s also pretty clear that putting more brown sheep (LDL) onto the field will lead to the disappearance of the flowers (lower protection against risk). However, putting more white sheep (HDL) onto the field will not make more flowers grow (increased protection). Still, for a person walking nearby, the presence of white sheep onto a field will indicated that a lot of flowers can be found there.

Within the scientific community, reactions differ. Some researchers think the study is striking enough to invite us to go back to basic laboratory experiments on HDL before blindly going on with the common « HDL hypothesis », whereas others remain optimistic and suggest the protecting effect of higher HDL levels could be due to some specific types of HDL or to more pronounced level differences that the ones triggered by genetic variations.