Sweetness without calories: are non-nutritive sugar substitutes a solution to the diabesity epidemics? 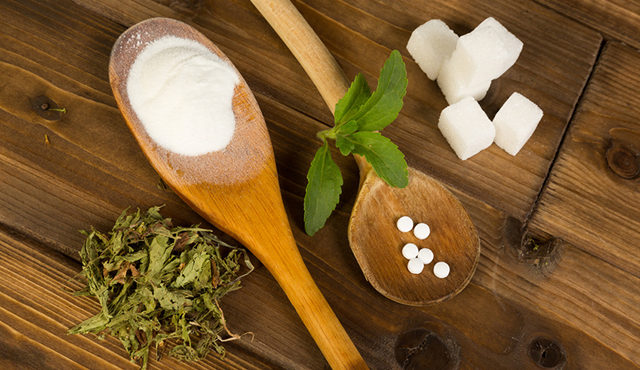 Sweetness without calories: are non-nutritive sugar substitutes a solution to the diabesity epidemics?

As humans, we have an innate attraction for sweetness, because our brain has been programmed to seek for energy. Therefore, even in the current context of worldwide  “diabesity” epidemics (obesity and diabetes), where it is highly recommendable to reduce calorie intake, it is neither desirable nor feasible to totally cut off on sugar from the diet.

That’s where artificial sweeteners or other sugar substitutes appear to be quite “welcome”. Sugar substitutes, whereas artificial or natural, are sweetening ingredients that usually carry less calories content than common table sugar (sucrose, which is a mix of glucose and fructose). Artificial non-nutritive sweeteners, which are also known as intense sweeteners because of their sweetening power many times higher than that of regular sugar, can be considered as energetically empty, like non-food ingredients. Indeed, except from aspartame, which contains 4 calories per gram, all the other four high-intensity nonnutritive FDA-approved sweeteners (acesulfame-K, neotame, saccharin and sucralose) are calorie-free molecules. They are used in a growing number of foods and drinks around the planet and are the only way of providing food with a sweet taste without increasing their calories content.

On the other hand, some research has suggested that consuming artificial sweeteners may be associated with increased weight, but the cause is not yet known. The idea is that although your brain got the sensation of sweetness, it also records the lack of usually associated energy content and thus leads you toward more calories consumption at your next meal (2, 3).

Sugar alcohols (also called polyols) are also manufactured carbohydrates, but are more natural in the sense that they are derived from sugars that occur naturally in certain fruits and vegetables. They’re not considered intense sweeteners, because their sweetening potential is lower or equal to that of sugar. Sugar alcohols aren’t considered non-nutritive sweeteners because they contain calories, but are nevertheless attractive alternative because they’re lower in calories than is regular sugar. Despite their name, sugar alcohols aren’t alcoholic (no ethanol content). They are found in many processed foods, including chocolate, candy, frozen desserts, chewing gum, baked goods and fruit spreads, usually replacing sugar on an equal basis.

Stevia, the last-born in the world of sweeteners

Last-born into the world of sugar substitutes is stevia, a natural sweetener widely used in South America for centuries and in Japan since 1970. Stevia rebaudiana is a plant growing in tropical regions of South-America, which contains Rebaudioside A, a molecule 200 to 300 sweeter than regular sugar. Its name comes from the Spanish botanist Peter James Esteve who brought it back to Europe during the 16th century. Due to its unique characteristic of zero calories, it is now fast becoming popular in many countries. It has been approved as a food additive since 2008 in the US and 2009 in France (note that although the FDA has approved highly refined stevia preparations as a novel sweetener, it has not approved whole-leaf stevia or crude stevia extracts for this use). Big multinational companies such as Coca-Cola and PepsiCo have used it for the development of novel drinks. Nowadays, stevia offers a 100% natural alternative to sugar on several continents.

Sugar substitutes: not magic but worth to be further investigated

While artificial sweeteners and sugar substitutes may help with weight management, they aren’t a magic bullet and should be used only in moderation. Just because a food is marketed as sugar-free doesn’t mean it’s free of calories. Moreover processed foods, which often contain sugar substitutes, generally don’t offer the same health benefit as do whole foods such as fruits and vegetables.

Further studies and long-term intervention trials are still needed to attest whether some artificial sweeteners might be considered useful in the field of functional foods, particularly in the context of body weight control and reducing risk of diabetes and cardiovascular diseases (1).