Potential of insects as food 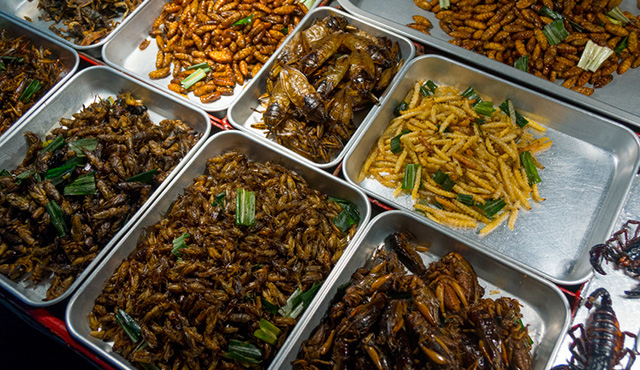 Potential of insects as food

Eating insects is a traditional dietary habit practiced in more than half the countries on the planet. It is called entomophagy. The scientific literature reports between 1500 and 2000 edible insect species so far, from crickets to beetles, including, ants, termites, bees, and larvae of moths and butterflies (1, 2). Mexicans alone eat more that 250 insect species.

More than just a food habit, insect consumption is considered by the Food and Agriculture Organization of the United Nations (FAO) as a possible answer to the growing world population (2.3 additional billions estimated for 2050) and its associated increasing food demand, not only in terms of food supply but also in terms of the ecological impact on the planet. In this context a report has been published in 2013, entitled Edible insects: Future prospects for food and feed security (available online).

First, insects are highly nutritious and represent good sources of proteins, fat, minerals and vitamins (1). Its energy content is generally comparable to meat. Protein content of insects ranges between 35% and 77%, and especially grasshoppers represent an excellent alternative protein source. Despite of being promising in comparison to soy and casein, the nutritive quality of insect proteins, that is the quality of their amino acid composition, still remains to be assessed by further feeding trials.

In terms of lipids, unsaturated fatty acids predominate in edible insects versus the less recommended saturated fats predominantly found in animal fat. However, fatty acid composition and cholesterol content in insects varies with their diet and ecotypes.

Regarding their mineral content, insects are usually insufficient sources of calcium, potassium and magnesium but do pretty well with manganese, cooper, iron and zinc, which made some researcher think insect consumption might help decreasing deficiencies in the two latter minerals in developing countries (3). Referring to the vitamins requirement for human nutrition, it has been shown that insects are usually good sources of riboflavin (vit. B2), pantothenic acid (vit. B5) and biotin (vit. B8) but not for vitamin A, C, and niacin (vit. B3).

Insect culture is an efficient and ecological alternative to livestock

On the other hand, the culture of insects represents a good ecological alternative to livestock (2, 4). Insects have high feed conversion ratios, emit low levels of greenhouse gases and have smaller water needs. Some insect species can be grown on organic side streams, reducing environmental contamination and transforming waste into high-protein feed. As a comparison, 2 kg of feed are needed to produce 1kg of insects whereas the same quantity of cow meat requires 8 kg of feed. It is also a good alternative in developing countries since insect cultures don’t require land acquisition and huge capital investment.

Impact still moderate but a new business is emerging

The first isolated business initiatives based on edible insects are slightly coming up. For instance, Belgian chocolate producer Wittamer has already commercialized pralines mounted with a cricket covered with golden powder. Some grocery shops in the Netherlands also started to commercialize insects. Some gourmet restaurants in Europe and in the US are also proposing some fine meals with insects.

Nevertheless, western societies are still far away from being delighted to try eating insects. Some companies are developing insect-based dough, as a clever way to bypass the “ick”-effect that eating insect inevitably triggers in the western consumer. As a matter of fact, the consumption of 10 insect species has been authorized by the Belgian Federal Agency for the Safety of the Food Chain (FASFC) since the end of 2013. At the European level, there is a legal uncertainty since every country interprets freely a European regulation of 1997 on novel food. This regulation had been adopted in the context of emergence of GMOs and does not really apply to insects.

What to be caution about in insect consumption?

However, beside the previously cited nutritional and ecological advantages of integrating insect in regular dietary habits, the presence of potentially harmful ingredients such as toxins (produced as a defense mechanisms against insectivores), allergens and antinutrients (such as phytates, hydrocyanides, oxalates and tannin), should be investigated (1). Furthermore, some insects might contain pesticides, when fed in pesticide-treated areas.

Potentially, therefore, in terms of their proportional macronutrient composition, insects could serve as equivalents of wild meat and a range of other foods including some shellfish, nuts, pulses, vegetables and even fruits (5). In the Western world, consumer acceptability will relate to its price, the perceived health and environmental benefits, and the development of tasty insect-derived products.

In the field of nutrigenomics, we can foresee that some particular insect powder extracts might be used in the production of specifically targeted micronutritional combinations.