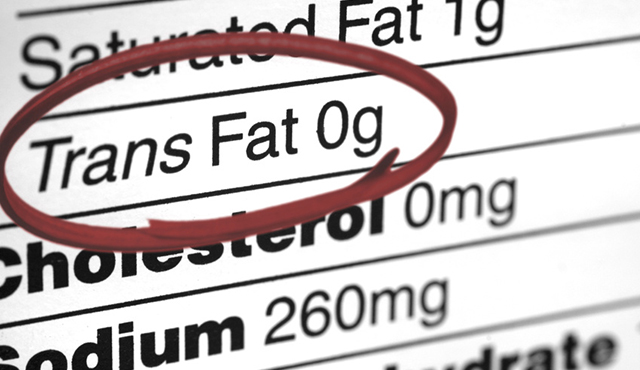 People are usually aware that there are good and bad fats. This distinction usullay refers to the effect of their intake on blood lipid profiles. “Good” fats, like polyunsaturated ones, especially omega-3, are known to lower the level of bad cholesterol (LDL), whereas “bad” fats, such as saturated ones, do just the opposite. But for several years, an accusing finger has been pointed at a specific class of fatty acids named trans fatty acids (TFAs). The latters, especially present in industrial products and prepared foods, were shown to increase the bad cholesterol, and thus cardiovascular risks.

In a review published in the European Journal of Clinical Nutrition in March 2013, researchers from the Department of Health Sciences and the EMGO Institute for Health Care Research of VU University, Amsterdam, and the Division of Human Nutrition of Wageningen University, concluded that detrimental effects of industrial trans fatty acids (TFAs) on heart health gathered enough scientific evidence and that limiting their intake will likely lower the risk of cardiovascular disease. Nevertheless, the exact mechanism by which this effect occurs goes beyond the observed changes in blood lipid profile and still remains to be unraveled. In addition, effects specific to TFAs that are naturally present in dairy and meat and TFAs produced as supplements for weight loss (conjugated linoleic acid) require further study (1).

WHAT ARE TRANS FATTY ACIDS?

The denomination of this class of fatty acid comes from their chemical structure. To make it simple, according to the nature of the carbon-carbon double bond, unsaturated fats can take two different geometric shapes, called “cis” and “trans”, which gives them different properties resulting in different impact on metabolism. The term “trans” therefore does not mean here “transgenic” or “transformed”.

In nature, fats are mostly in the “cis” configuration, except in dairy product and meat from ruminants, where “trans” fats are found in small quantities. Today, the largest amount of “trans” fat consumed is generated by the food industry as a side effect of partially hydrogenating (industrial process to make solid fats) unsaturated plant fats (generally vegetable oils) and upon frying oils or refining polyunsaturated-rich vegetable oils. Thus TFAs are found in a wide range of food products such as prepared foods, confectionery, biscuits, pastries, pie crusts, spreads, trade chocolates, commercial baked goods, chips, crackers, cereals, granola bars, peanut butter (not natural), margarine made ​​from hydrogenated or partially hydrogenated oils, and even in some “healthy” food from supermarket shelves. One in particular, CLA (Conjugated Linoleic Acid), is even produced industrially for sale as supplements in helping weight reduction!

WHAT IS TO BLAME ON TFAs?

Basically, TFAs have the same adverse effects as saturated fats. They tend to raise blood levels of bad cholesterol (LDL) while lowering those of good cholesterol (HDL), a combined action that significantly increases the risk of cardiovascular disorders (for scientific references see (1)). According to scientific results, TFAs seem to be even more harmful since they may increase the risk of the order of 132% compared to 32% for saturated fats (2).

As long as we stood by the unfrequent natural trans fats the health risks were virtually nonexistent. However, the current ubiquity of synthetic trans fats in processed food products is now changing the picture and raises concern of health officials. Consequently, actions from the food industry (such as food reformulation and food labeling) and from governments have resulted in a considerable decrease in TFA consumption over the last two decades, in particular in Europe, and, to a lesser extend in the US (3, 4)