Effects of nutrients on the last step of genetic flow 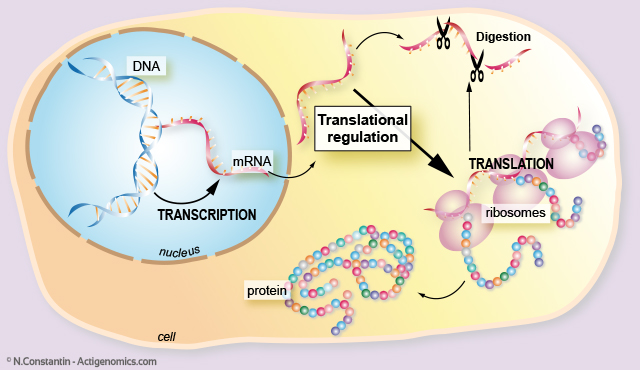 Effects of nutrients on the last step of genetic flow

Translation (protein synthesis) is the last step of genetic flow

Genes contain the original plans for the production of all the proteins in our body, that is the ‘workers’ that make our organism grow and survive. As these plans are far too important for the cell to take any risk of damaging them, they are kept highly guarded inside the cell nucleus. Instead, copies are sent outside to the protein manufactories of the cell. These copies are called transcripts or mRNAs. In the protein production plant, big protein/RNA complexes called ribosomes are the main workers. They translate the mRNA sequence into a sequence of amino acids, the building blocks of protein. This process is called translation and constitutes the very last step of protein synthesis. Between the activation of a gene and the resulted production of the corresponding protein a lot a things can be regulated or go wrong, so that the amount of proteins in a cell may not always reflects mRNA levels (1).

Translation requires a complex machinery that is tightly regulated. In particular, nutrients can modulate translational activity. The role of nutrients in translational control is indeed more important than is often assumed. Mounting evidence suggests that translational regulation allows the cell to respond to rapid changes in the environment (2).

A key signaling pathway that has been highlighted in translational regulation in growth and metabolism is the TOR pathway, which involves the mammalian target of rapamycin complex 1 (mTORC1) (3, 4). By sensing both the energy status of the cell (through insulin signaling) and amino acid availability, this protein complex is able to adjust translation rates for the benefit of the cell. For instance, if there is a lack of amino acids, protein synthesis is slowed down. Similarly, depending on the energy status, the TOR pathway can adjust the balance between energy storing and utilization by altering the production of proteins triggering anabolic or catabolic processes, respectively.

Getting better knowledge about how nutrients affect this last step of the genetic flow from gene to protein now appears to be a very important area of research for nutrigenomics, although it has been less investigated so far than gene regulation itself. As a reminder, this new research field aims at identifying new interactions between nutrients and the functional consequences of gene expression, with the hope to develop population-tailored foods and dietary recommendations to support health. Indeed, high-throughput genomic tools so far have mainly been developed to capture relevant changes at the level of gene expression, that is to say at the first stage of genetic flow, when the genetic information is primarily transcribed into mRNA copies, or, alternatively, at the protein level.

For further reading on how mTORC1 regulates translation, in particular with regard to cell growth and cell proliferation, and is involved in metabolic diseases, cancer and ageing, we invite you to consult our blog for a soon upcoming detailed article on the subject.