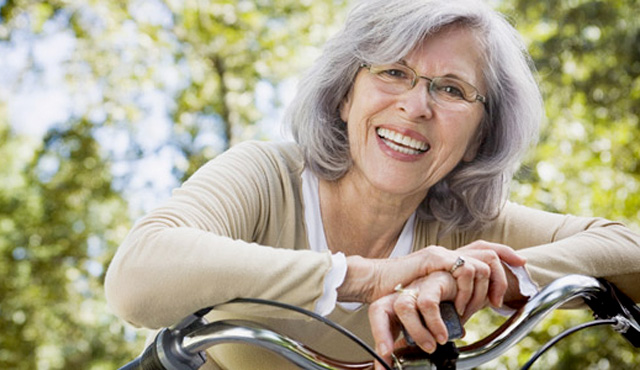 Osteoporosis is the most common progressive bone disease. It is characterized by a decrease in bone mass and density, which happens when you lose too much bone, make too little bone or both. Normal bone is composed of protein, collagen, and calcium, all of which give bone its strength. Bones that are affected by osteoporosis can break with relatively minor injury that normally would not cause a bone to fracture such as a minor fall or, in serious cases, even simple actions, like sneezing or bumping into furniture. The disease might stay unnoticed until the occurence of fractures.

Osteoporosis means “porous bone”. This means your bones have lost density or mass and that the structure of your bone tissue has become abnormal. In osteoporosis, the bone mineral density (BMD) (the amount of mineral matter per square centimeter of bones) is reduced, bone microarchitecture deteriorates, and the amount and variety of proteins in bone are altered. Osteoporosis is defined by the World Health Organization (WHO) as a bone mineral density of 2.5 standard deviations or more below the mean peak bone mass (average of young, healthy adults) as measured by dual-energy X-ray absorptiometry (1).

Osteoporosis affects an estimated 75 million people in Europe, USA and Japan. Studies suggest that approximately one in three women and up to one in five men age 50 and older will break a bone due to osteoporosis (IOF International).

The beginning of the decline of bone mass (with a BMD between -1.0 and -2.5 is called osteopenia and is considered by many doctors to be a precursor to osteoporosis even if not every person diagnosed with osteopenia will develop osteoporosis. In this regard, data from the US National Health and Nutrition Examination Survey (NHANES) estimate the percentage of osteopenia to 49% among women and 30% among men (2). As another example, in Argentina shows twice as many women over 50 years old with osteopenia (two in four women) than with osteoporosis (one in four women). (3).

A dynamic and constant remodeling

The underlying mechanism in all cases of osteoporosis is an imbalance between bone formation and bone resorption. Bones constantly undergo a dynamic process of remodeling in order to conserve the biomechanical properties for movement and support. This life-long process is generated by two cell types called osteoblasts and osteoclasts, respectively in charge bone the formation and resorption. Throughout the life of a person, there are three distinct phases of bone remodeling: the growing phase in which takes place the synthesis of the bones with its peak of bone mass situated three years after reaching puberty; the adult phase in which each cycle of remodeling comprises a 2-3-week resorption phase followed by a 3-month formation phase; and finally the aging phase, starting already at the age of 30 and accelerating the pace in women with the menopause, where resorption gains over formation.

Osteoporosis mostly affects women. From 30 years forwards the loss of bone mass represents approximately 3-5% every 10 years. But, in women, the sudden diminution of estrogen in the onset of menopause accelerates this degeneration. At the age of 80, women have already lost 80% of their maximal bone mass, whereas men have lost 25%.

What can we do about it?

In spite of the efforts of medical and pharmaceutical research, therapies remain limited and carry with them adverse effects such as stomach acidity and bone pain. Pharmacological agents against osteoporosis either decrease bone resorption to produce secondary gains in bone mass or directly stimulate increases in bone mass (4). If the loss of bone mass is a normal process of aging, it can be worsened or limited through regulation of bone balance In particular, nutrition can play a role in this regulation, which opens a future possibility for nutrigenomics in personalized nutrition and genetic screening for the prevention of osteoporosis (5).The roles of calcium and vitamin D on bone health are already known for years (6) (7) but there are numerous others nutrients such as proteins, magnesium, zinc, copper, iron, fluoride, vitamins A, C, and K  that are required for normal bone metabolism. Studies on several animal models have investigated the bone protective effects of resveratrol, a plant polyphenol with various anti-aging properties (8, 9).

Nutrigenomics: the innovative approach that could change everything

Nutrigenomics or the action on gene regulation through nutrition offers to address osteoporosis from a new angle. Osteoporosis being a consequence of a loss of bone balance, why not try to prevent, or, when needed, restore it (10) ? SNG’ product BONE METABOLISM, a combination of low dose all-natural micronutrients, is the first new-generation dietary supplement to have accepted the challenge so far. It has been clinically shown to contribute to the global regulation of bone balance and augments bone mass.